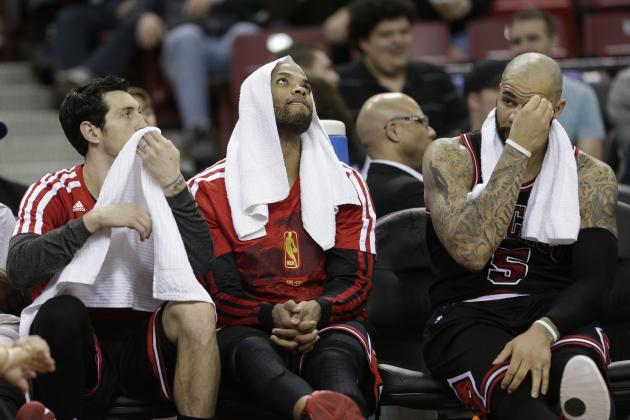 The Chicago Bulls’ hopes for competing as a power in the Eastern Conference were gashed early in the NBA season, but the team is still in playoff contention and is looking to make moves to improve in the future.

The loss of Derrick Rose back in late November turned Chicago’s season from one of hope to just another one spent waiting for its superstar to return.

Though it might not actually come to fruition if the Bulls decide to play it safe again, coach Tom Thibodeau said there is potential for Rose to return for a playoff run, according to Joe Cowley of The Chicago Sun-Times:

I don’t want to jump to any conclusions, just going step-by-step. When he handles the next phase, then they’ll move him on to the next one. Just make sure he’s ­completely healthy, that’s all we’re thinking about.

With those hopes now hanging in the balance, the Bulls are in an interesting position. They are a playoff team while also looking at the possibility of freeing up space to sign a max player in the offseason like Carmelo Anthony, who reportedly has Chicago high on his list, per Yahoo! Sports’ Adrian Wojnarowski.

While the talks of Anthony and a Rose return hang in the balance, there are still several trades the Bulls could possibly make before the trade deadline officially ends on Feb. 20.

Here are the most recent trade headlines as they become available.